Do you want to take part in a book club, but you feel like the usual heavy content for book clubs is far too much work right now? Well, never fear! Here are 6 light, fun and easy reads for you to choose from! Strikingly funny and hard to put down, these books will keep you interested without the chapters feeling like a deep dark slog…. 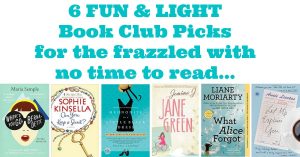 From GoodReads: A compulsively readable and touching novel about misplaced genius and a mother and daughter’s role in an absurd world.

Bernadette Fox is notorious. To her Microsoft-guru husband, she’s a fearlessly opinionated partner; to fellow private-school mothers in Seattle, she’s a disgrace; to design mavens, she’s a revolutionary architect, and to 15-year-old Bee, she is a best friend and, simply, Mom.

Then Bernadette disappears. It began when Bee aced her report card and claimed her promised reward: a family trip to Antarctica. But Bernadette’s intensifying allergy to Seattle – and people in general – has made her so agoraphobic that a virtual assistant in India now runs her most basic errands. A trip to the end of the earth is problematic.

To find her mother, Bee compiles email messages, official documents, secret correspondence – creating a compulsively readable and touching novel about misplaced genius and a mother and daughter’s role in an absurd world.

Can You Keep a Secret? by Sophie Kinsella

From GoodReads: Meet Emma Corrigan, a young woman with a huge heart, an irrepressible spirit, and a few little secrets: Secrets from her boyfriend: I’ve always thought Connor looks a bit like Ken. As in Barbie and Ken. Secrets from her mother: I lost my virginity in the spare bedroom with Danny Nussbaum while Mum and Dad were downstairs watching Ben-Hur. Secrets she wouldn’t share with anyone in the world: I have no idea what NATO stands for. Or even what it is. Until she spills them all to a handsome stranger on a plane. At least, she thought he was a stranger.…Until Emma comes face-to-face with Jack Harper, the company’s elusive CEO, a man who knows every single humiliating detail about her…

Mennonite in a Little Black Dress by Rhoda Janzen

From GoodReads: Not long after Rhoda Janzen turned forty, her world turned upside down. It was bad enough that her brilliant husband of fifteen years left her for Bob, a guy he met on Gay.com, but that same week a car accident left her with serious injuries. What was a gal to do? Rhoda packed her bags and went home. This wasn’t just any home, though. This was a Mennonite home. While Rhoda had long ventured out on her own spiritual path, the conservative community welcomed her back with open arms and offbeat advice. (Rhoda’s good-natured mother suggested she date her first cousin—he owned a tractor, see.) It is in this safe place that Rhoda can come to terms with her failed marriage; her desire, as a young woman, to leave her sheltered world behind; and the choices that both freed and entrapped her.

Written with wry humor and huge personality—and tackling faith, love, family, and aging—Mennonite in a Little Black Dress is an immensely moving memoir of healing, certain to touch anyone who has ever had to look homeward in order to move ahead. 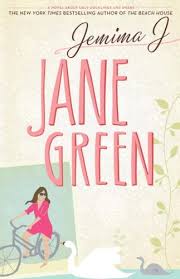 From GoodReads: With a fast-paced plot that never quits and a surprise ending no reader will see coming, Jemima J is the chronicle of one woman’s quest to become the woman she’s always wanted to be, learning along the way a host of lessons about attraction, addiction, the meaning of true love, and, ultimately, who she really is.

What Alice Forgot by Liane Moriarty 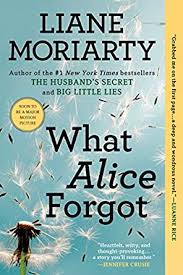 From GoodReads: Alice Love is twenty-nine, crazy about her husband, and pregnant with her first child.

So imagine Alice’s surprise when she comes to on the floor of a gym and is whisked off to the hospital where she discovers the honeymoon is truly over — she’s getting divorced, she has three kids and she’s actually 39 years old. Alice must reconstruct the events of a lost decade, and find out whether it’s possible to reconstruct her life at the same time. She has to figure out why her sister hardly talks to her, and how is it that she’s become one of those super skinny moms with really expensive clothes.

Ultimately, Alice must discover whether forgetting is a blessing or a curse, and whether it’s possible to start over.

Let Me Explain You by Annie Liontas

From GoodReads: Let Me Explain You begins with a letter: Stavros Stavros Mavrakis- Greek immigrant, proud owner of the Gala Diner, having had a premonition of death and believing he has just ten days left to live, sends an email to his estranged ex-wife and three grown daughters in which he lays out his last wishes for each of them. He then sets about preparing for his final hours. With varying degrees of laughter and scorn, his family and friends dismiss his behavior as nothing more than a plea for attention, a mid-life crisis of sorts, but when Stavros disappears without explanation, those closest to him-particularly his eldest daughters Stavroula and Litza- are forced to confront the possibility of his death and the realities of their loss.

You have Successfully Subscribed!